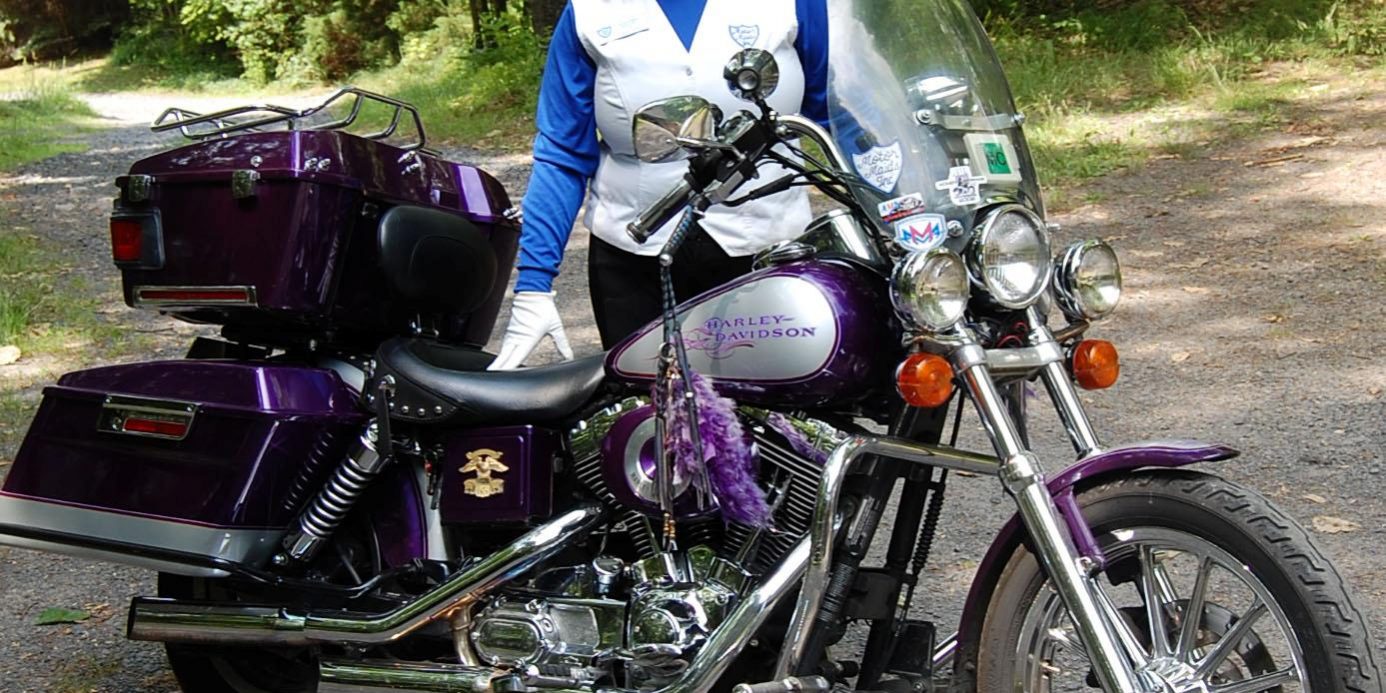 As an ongoing feature, MAD Maps and the Women’s Coalition of Motorcyclists will be celebrating the women who have made an impact on the motorcycle industry, from pioneers to newbies, industry players to you.

IN THE SPOTLIGHT:  DIANE RUMBEL

WCM Representative for the Motor Maids

HOW DID YOU START RIDING?

Back in 1979, Diane married Dave Rumbel and Dave always wanted a motorcycle. From the time he was a boy and heard the neighbor’s old Harley Davidson pan head going up the road, it was his dream. Diane said, “Don’t even think about it, maybe by the time you’re 40, we can afford one” (thinking that would never happen, mainly because they were raising children and couldn’t afford it).  Much to her surprise, Dave approached Diane a few months before his 40th birthday in 1996 and told her that he found the bike we was looking for in the newspaper. Diane gave in but told him he would have to figure out the financing and in the back of her mind thought that she would wind up at home while Dave was out riding.

Dave then purchased his dream bike, a used 1991 Harley-Davidson Electra Glide Classic with a comfortable Queen Seat on the back for Diane. It was then that Diane found out she loved traveling on two wheels. Before Dave knew it, she was planning their weekends. This was all good for a few years until Dave was working out of state for a couple of months during the “Fall Season”, the best time to ride in the North East (chasing the colors). Diane was bummed because she couldn’t join her friends on these trips and decided that she needed her own bike.

In January 2000, Diane wound up in a Harley dealership and there was a used 1984 Honda Shadow 750 trade-in in the back. With Dave’s encouragement and support, she bought it and realized she was on her way. She signed up for the Motorcycle Safety Course, a free program offered by the State of Pennsylvania. On April 15, 2000, Diane successfully passed and got her motorcycle endorsement and was now licensed to ride a motorcycle.

Diane had her class M license, but still needed practice, so she would ride all through the neighborhood on her Honda Shadow and Dave would dutifully follow. Living in the country, there were tons of curvy roads, so she would ride for miles just to avoid turning around. By late April, she traded the Honda in for a used 1999 H-D sportster Hugger, and later that year and 7,000 miles later, she traded the hugger for a new 2001 FXDL Harley-Davidson Low rider. To this day, Diane still rides the same FXDL but now has hard bags, a tour pack and Sirius Satellite Radio for the long road trips. She never named her bike, but did have a painter scrawl on the tank “It’s a Girl.” Today, in 2013, she proudly has 96K on the odometer and will see it turn over to 100K during the trip to this year’s Motor Maid convention in Bend, Oregon.

WHY DID YOU JOIN MOTOR MAIDS?

Diane had a lot of guy friends who would sit around and talk about rides they wanted to do. They were talking about starting a club and one of the men stated that “No Women” would be allowed, even though Diane had been riding with them and her husband for several years. That was enough for Diane to get out and find a club that not only supported but embraced women riders.

Diane started surfing the Internet and found Motor Maids. She was immediately smitten because one of the criteria for being a Motor Maid is that the member must ride her own motorcycle. Diane officially joined the group in fall of 2001 and her riding career was just beginning. Diane was mentored by then PA Motor Maids District Director Lois Hendershot, who invited Diane to join her on many rides.

Diane’s first big trip was riding to the AMA “Women in Motorcycling Conference” in 2002 in Buchanan, West Virginia. This was a life-changing event for Diane.  She was raising her kids, working in a factory, and was ready to try to do something beyond her comfort zone. Returning from the conference with more confidence than ever, she immediately enrolled in college to get her teaching degree.  Diane has not missed a Motor Maid convention or an AMA Women’s Conference since 2002.

Diane’s confidence continued to grow and in 2003 she wanted to ride her first ever cross-country adventure to attend the Motor Maids Convention in Chico, CA. Dave said, “OK, but you need to ride out with someone.” Two experienced long-distance travelers agreed to let her tag along as long as she could ride 500-600 miles a day. Motor Maids, Pat Crosby (MN) and Wendy Ream (NY) taught Diane how to ride long and hard, but safely to make it from PA to CA in five days. The return trip would be a more leisurely touring and scenic ride with Lois and her husband, Russ. However, Russ’s bike broke down in Mountain Home, Idaho and Diane, with Dave’s blessing, made the decision to head out on her own and ride back solo to Pennsylvania.  This solo trip was another turning point with Diane feeling  the most empowered than she had ever felt in her life.

Since that life-altering ride in 2003, she has done multiple cross-country trips. She loves to travel as free as a bird, stopping where and when she wants, and riding for how long or how far she wants.. She loves riding with and without other riders. Most importantly, she just loves to ride!

KEEPING IT IN THE FAMILY:

Diane is the proud mother of two children, Carl and Justine (30 & 28). Justine was licensed to ride in 2008 and, like her mom, started out learning on a Honda and quickly upgraded to a Harley-Davidson Sportster Low. Also, like her mother, Justine joined the Motor Maids in 2008 (and yes, you guessed it: Diane sponsored her).  Justine’s first convention was in Lewiston, Maine in 2009 and she guided both her Mom and Dad (male guests are welcome – often called Mr. Motor Maids) to the Convention.

Diane’s son, Carl, is also licensed to ride, but in the Rumbel family the women seem to out number the men.

TAKING IT TO THE NEXT LEVEL:

Since joining Motor Maids in 2002, Diane has put over 90K miles on her bike, most of them riding with fellow Motor Maids. In 2011, at the Grand Rapids Convention, Diane ran unopposed for the position of Executive Publicity Officer. As a Communications and News Broadcasting Teacher in Mount Carmel, PA, this was a natural fit for her talents.

Because of her own personal experience and the confidence that she gained through riding, Diane’s joy in riding grew by leaps and bounds. Part of the mission of Motor Maids is to spread the joy of riding and a positive image of women motorcyclists. As one of her lessons in the beginning of the school year, she asks her students if they think she looks like a motorcyclist; students’ who have not heard of “the teacher that rides a motorcycle”, will say no. Diane teaches them that motorcycling is not all about breaking rules and getting tattoos. She uses her motorcycle example as an example of the many stereotypes we face every day. Some Motor Maids have even paraded in her high school’s annual homecoming parade.  While traveling, she will often send post cards to her students from the road, and has influenced many kids (and their parents) to view motorcyclists more positively.

WHAT ARE YOUR HOPES FOR THE WCM?

Susan Gibson, Motor Maids, Inc President, saw Diane’s experience and enthusiasm as Publicity Officer as an immediate benefit to the WCM. At the Motor Maid Executive Board meeting, Susan asked if Diane could attend and represent Motor Maids at the first meeting of the steering commission in Ohio, late January of this year. While representing the Motor Maids, Diane had the fantastic pleasure to be a part of the first meeting bringing together the likes of Women in the Wind, Women on Wheels, Pro-Convention, and more.  These groups met to discuss how to unite under one umbrella to grow the ranks of women riders. We may all belong to different clubs, but we are all part of a bigger picture.